On our third day in Batanes, we spent one whole day doing the South Batan Tour. From the homestay, we passed by Paderes, a long wall along the road which is also the surname of the architect who built this. There was an ongoing installation of street lights that time which was proof of the continuous development of the area to cater to the growing tourism.

Our first stop was the Chawa view deck which has the oldest uplifted coral. According to our guide, Chawa came from “kawa”, meaning rock. It’s like a viewing deck built beside this gorgeous coral formation. Even if it’s our third day already, we were still in awe with Batanes. We admired how the turquoise sea water splashed into the corals below and how the sea seems to have a lot of different blue and green colors.

From here we traveled to the next town of Mahatao, and stopped by Mahatao Boat Shelter Port along the way. Our guide said that the shelter port used to be an Idjang known as the Mahatao Idjang. Today, it is used to shelter the boats of Batanes since the province experience a lot of storms throughout the year.

We had our lunch at Mahatao town and spent some time exploring San Carlos Borromeo Church. It has one of the nicest church front lawn I’ve ever seen. 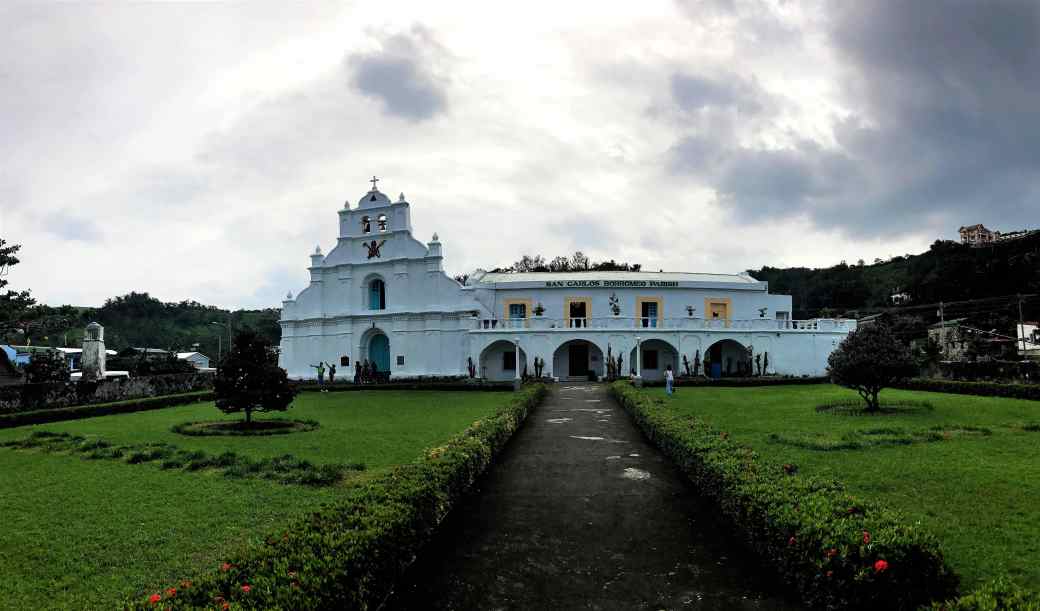 After Mahatao, we continued our road trip and stopped by the Old Spanish Bridge and House of Dakay. The Spanish Bridge is one of the intact bridges built during the spanish era. It serves as a living museum of the spirited past of Batanes.

Kaye and I at the Old Spanish Bridge in Ivana

House of Dakay is our next stop. This is the oldest stone house built by Luisa Estrella in 1887. The walls of the house are very thick and made up of stone and lime. The roofs are made of cogon grass about 1/3 of a meter thick. Our guide said the cogon roof lasts for about 25-30 years before the need to change it. On Sept 13, 1918, a 7.8 magnitude earthquake hit Batanes which lowered the ground of Ivana. House of Dakay is one of the five houses that have survived. 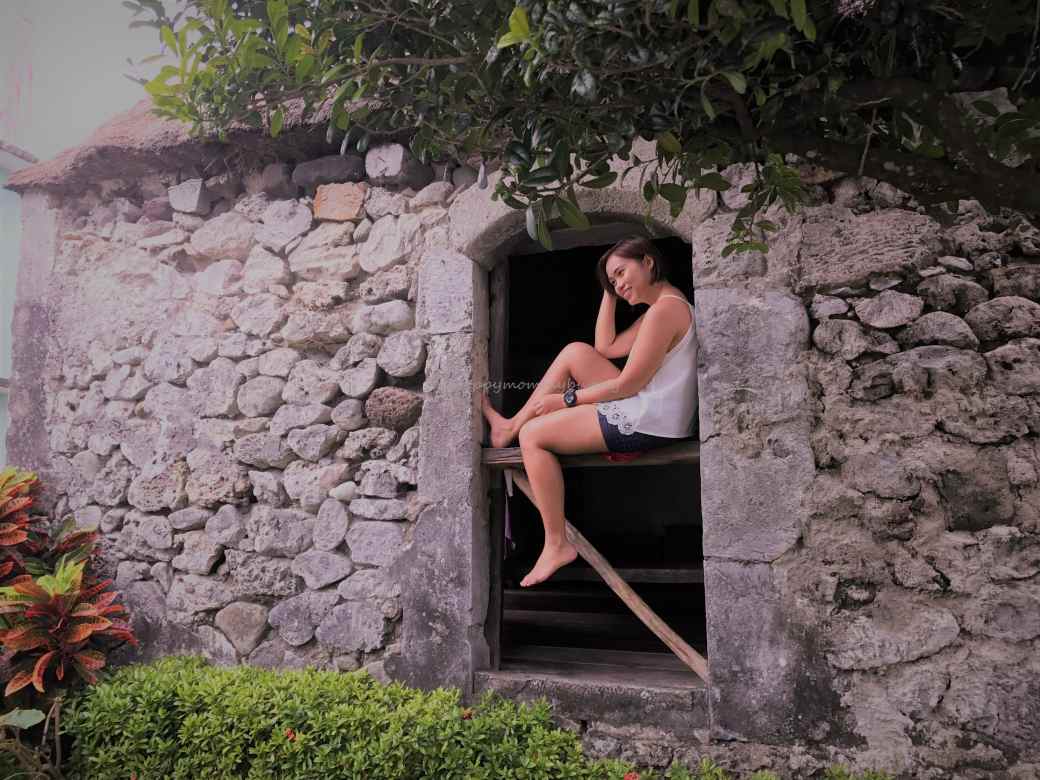 The famous window at the House of Dakay

After visiting the House of Dakay, we passed by San Jose de Ivana Church and the Honesty Coffee Shop again. But since we already explored this area while waiting for our Sabtang boat the previous day, we didn’t spend much time here during the tour.

The South Batan tour usually takes the whole day because of the distance between the different sight seeing spots that we had to go to.

Winding road in Uyugan. It has great view of Pacific Ocean and the Batanes hills

On the way to Racuh a Payaman, we passed by Alapad Hills and Rock Formation in the town of Uyugan. It has such a magnificent view of the Pacific Ocean on one side and of the rock formation at the other side. 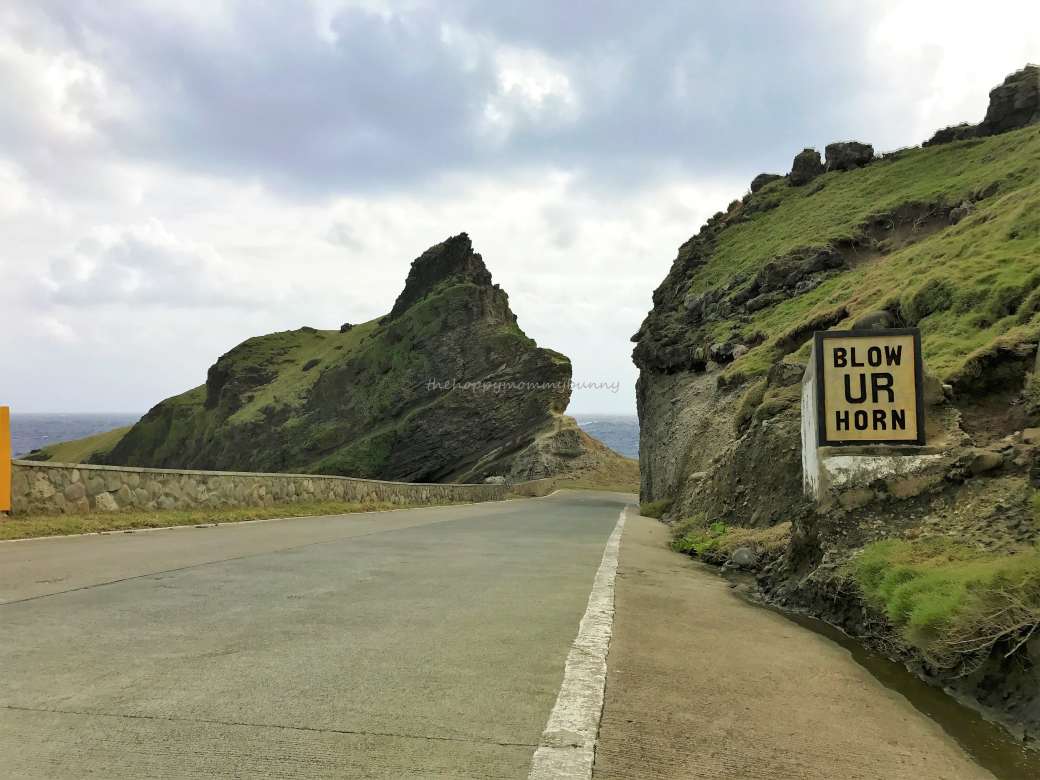 BLOW UR HORN. Famous Batanes tagline because of the many blindspots along the hi-way.

Our next stop was Racuh A Payaman, or famously known as Marlboro Country due how it resembles the rolling hills featured in the old Marlboro cigarette’s TV commercial. This is one of the most famous landmarks of Batanes, and you will definitely understand why when you step here. If you had dreams of singing on a hill like Maria from the Sound of Music, then this is where you should channel your inner Maria 🙂

Our last stop was the Tayid Lighthouse in Mahatao. It is one of the three functional ligthouse that was built in early 2000s and one of the several tourist attractions in Mahatao. We’ve come in full circle and from here went back to Basco and completed our South Batan tour.

Kaye at the Tayid Lighthouse 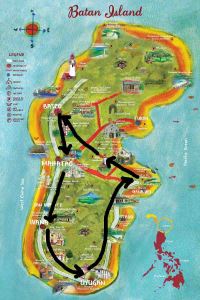 Other posts from the Batanes Series: